A few minutes down the road from St Annes is Lytham. As I mentioned previously, I'd always thought Lytham St Annes was one place, but I am sometimes stupid.  Lytham and St Annes are two towns whose boundaries have merged together over the years and the lazy geographers have now lumped the two names together to confuse people like me.

It can be quite easy to miss Lytham whilst driving as I have done that before.  This time I took no chances and even pulled in to check my GPS map on my mobile to make sure I was still heading in the right direction - thankfully I was.

Whilst there is free parking around Lytham, it was a busy day and we struggled to find a parking spot, so I  parked in the pay and display by Lytham train station.  It was £1.40 for two hours and I managed to pick up one of the pine cones littering the car park.  The pine cone is still in my car looking at me saying 'what are you going to do with me?'  I've no idea actually.  It will stay there until I get bored or it disintegrates.

Anyway Lytham was a pleasant surprise.  Whilst it's technically a seaside resort, it doesn't feel like one.  The town is set a little inland from the beach and it's quite an upmarket town.  I should have realised when driving in from St Annes it was going to be quite well-to-do.  There were some amazing seafront homes looking rather swish, well maintained and some of which were rather modern affairs saying 'I'm worth pots of money'.

To me Lytham is Victorian architecturally - by the station there were some large red brick houses looking rather lovely.  Some were private homes and some were converted offices - all had neat gardens with manicured lawns and blooming flowers.  There was a rather fine deli set  in a rather grand Victorian building with a clock tower on top by some tulip filled public garden.  Most of the shops were set along the main road, most seemed well maintained and busy.  There is definitely civic pride happening in this town. 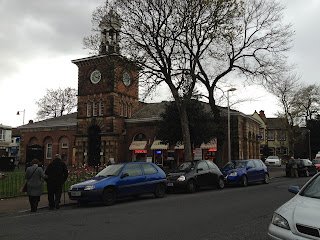 There were plenty of charity shops in Lytham.  Some of the stuff was rather nice too - Cancer Research was a notable shop in that respect.  I bought a book in Barnardos and was impressed with some of the art work they had hanging in the shop.  It you shopped in Lytham regularly you would definitely pick up the odd gem.  I think other people had the same idea too as most of the charity shops were packed full of browsers.

You could really get fat in this town with the amount of coffee shops and restaurants vying for people's attention.  Lytham had a greater choice of eateries than St Annes.  I swear the cafe has taken over from the pub as the main choice of meeting place for people.

As for the shops there were the usual high street names, but I was pleased to see lots of boutiques and interesting shops. There was a little arcade which had a mix of the regular and off beat shops.  For the Top of the Pops fans, there was even an underwear shop was called 'Legs and Co.' There was also Stringers department store which looked far more lush and refined version of JR Taylors in St Annes. 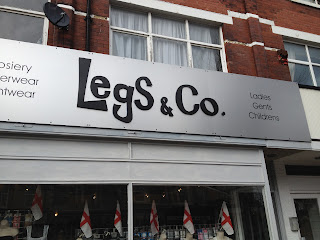 Dogs, dogs, dogs are everywhere!  If I felt naked in St Annes without a dog, in Lytham it appeared we were breaking some kind of bylaw by not having one.  There were all kinds including Corgis, fierce dogs with their unneutred bollocks swaying in the breeze and tiny lapdogs with Paul Weller haircuts.   It was like some dog convention had hit town.  We did spot a small dog that looked like a cross between an Old English Sheep Dog and a Highland Terrier.  I don't know how that could physically happen, but it clearly did.

Neil managed to find the ice cream he was after - cookie flavour Cornetto Enigma.  He is a greedy pig at times - fish and chips, cake and ice cream.  He did admit to me later he has been on a diet plan lately which consisted of him cutting down on cakes.  I hate to say this but it worked - damn him!

Lytham was full of older, well-groomed, perfumed ladies wafting their way through the Saturday crowd of families shopping.  There is no need to bring the likes of Mary Portas into this town - the high street here is doing well thank you very much.  There was the odd empty shop front, but it won't be long before it is filled with another cafe or boutique.

Clearly Lytham is the well-to-do sister of St Annes.  But then again both of them are a cut above their chav relation of Blackpool.  For a split second I did consider we should go to Blackpool, then again why spoil a nice day.
Posted by Anne-Marie Marshall at 12:48 pm