Matlock is only a 15 minute drive from Bakewell. I really didn’t know much about the place apart from it being a former spa town and I have a fondness for spa towns – so I was hopeful this would be a good place to visit. 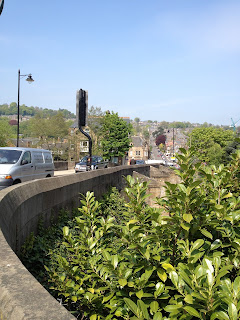 We managed to get parked up at the pay and display car park at the Coop, which was above a small market.

Matlock is a pretty town and someone we knew said it looks a bit like Switzerland in parts. I’m not too sure about that myself, but it was a rather hilly town. There was a rather imposing house on the top of the hill overlooking the town – there must be rather fab views to behold up there.

There are plenty of shops to browse round in Matlock. I liked the old-school art supply/stationary shop with its vintage double fronted glass windows.  You still can get Basildon Bond paper in there, which was the writing paper of choice in my day.

I do like a good wool shop much to Neil’s annoyance. Lately I’ve been on a mission to find a teal/purple shade of Sirdar Indie wool. So I was overjoyed to find a wool shop in Matlock. When I asked the assistant in the shop if they stocked it, they were rather disdainful and almost rude in their response of ‘No’. I felt as if I had been a chav asking for the Daily Sport in some really posh newsagent. Is Sirdar Indie Wool the chav of the wool world? I really love its chunky, bold colour, wooliness.

I needed some cheering up at that point and thankfully found a nice, twee craft gift shop. Staff were much nicer in there and the shop gave me some great ideas for craft projects. I’m now half way through making a fabric message board.

You can’t get away from the fact there are plenty of antique shops in the town. On the south side of the river there was a street full of them. I could have spent hours there as well as a fortune. The Matlock Antiques and collectables was the best. There were just rooms after rooms of stock. If I recollect correctly there was also a little café in the back of the shop. Neil managed to drag me out of the shop without me doing major damage to my bank balance. 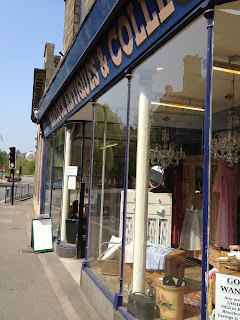 The charity shops were okay. With so many antique shops in the town I reckon they regularly trawl the charity shops for the decent stuff, so it would be hard to pick up a treasure here. I did have to stop Neil from buying a short wave radio though. At home we are overrun by radios and a quick tally in my head reckons we have a minimum of 9, although I’m sure we are in double figures.

I did overhear an old lady with a London accent saying to the shop assistant in a charity shop about how lovely the people are in Matlock and how she liked living there. Although in the next breath she did mention there was a local drug problem in the town. She would report her neighbours to the police, but was worried they would kill her cat if she did!

The two distinctive things I noticed about Matlock were that as that the Derwent river splits the town into two, which reminded me of Whitby, but on a smaller scale version. The other thing was Hall Ley Park by the banks of the Derwent. You rarely get a park slap bang in the middle of a town and this park was not your traditional English park. It was quite like the parks you find in the heart of Paris, with clay footpaths and lots of outdoor activity areas. I loved the fact it had a skate park for the young people and these are the best ways to engage this age group in positive activities. Councils are often not keen on these with the problems you can get with the skating sub culture. Although as long as you site them correctly and effectively monitor them they are great. Can you tell I’ve worked in regeneration? Anyhow skate parks are ace!

Matlock is a lovely little town with its quirks and cuteness, although it has suffered a little with the recession.  You can’t keep a good town for long and this is a good town so it’s well worth a visit.

Posted by Anne-Marie Marshall at 1:27 am No comments: