We decided to take a short break to the Peak District in Derbyshire and I had plotted a plan to take in three towns, one city and a suburb over our three day trip.  We don’t seem to go to Derbyshire at all - I don’t know why as it’s very pretty and on the door step to Manchester.  Anyway as luck would have it the weather forecasters had predicted rain, but due to the vagaries of the British weather we drove off in glorious sunshine.

Our first port of call was the spa town of Buxton.  It was our journey to Buxton that made me realise why Derbyshire is not high on the ‘Life in Northern Towns’ agenda – the journey is a pain in the proverbials. The first bit is okay picking up the M60 and then exiting at junction 27.  The pain is the A road part through Stockport– you need to find the A6 which can be tricky and once you’re on there you are basically in normal urban traffic driving at 30mph if you’re lucky and if you're unlucky stopping at every traffic lights. This was so boring!  Eventually, once you pass Hazel Grove, travelling will perk up as you can drive a bit faster and you get to see some of the lovely countryside.  At Whaley Bridge you can go two ways to Buxton – continue on the A6 or pick up the A5004.  There’s a dual carriageway on the A6 bypassing Chapel-on-le-Frith, so we took that route as I needed to get into 5th gear at some point of this journey.  There are lots of quarries in Derbyshire so you need to be aware of heavy goods traffic on some of these roads, but as it was a Sunday this wasn’t an issue for us.

Finally we got to Buxton!!! You can get a direct train from Manchester Piccadilly to Buxton and I have to say if you are only going to Buxton take it.  It does save the pain and time in driving.

We have been to Buxton a number of times over the years and I’m not overwhelmed by the place.  It's very pretty, it’s a prosperous place with lots of lovely houses, it has its own Opera House, Spa and generally rocks a genteel vibe.  That said I think the weather has a lot to do with it.  When we’ve been in the past the weather has been either dull or raining which puts a dampener on things.  This time it was bright sunshine and that made such a nice difference.

We parked near the roundabout under the huge railway bridge that dominates the town.  We found a spot immediately, however one to the parking machines wasn’t working and we lost a couple of pounds to it.  A coach driver saw our struggle and whacked the machine for us.  He helped extract a pound refund for us.  Thankfully there was another machine nearby so we could get our parking ticket.

We honestly weren’t expecting much in terms of shopping as it was a Sunday and it can be hit or miss in towns whether they are open or not.  We were in luck and most of the shops were open.  The shops in Buxton are centred around a sloping pedestrianized street, which by the looks of things had been refurbished in the past few years with lovely paving and street furniture.  As it was a Sunday the town wasn’t mad busy with shoppers but there were plenty of people about. 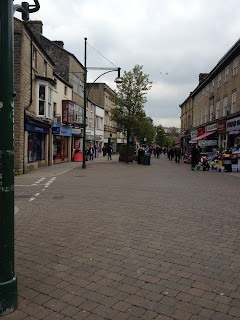 Architecturally this place has lots of beautiful buildings to see including the Crescent, Buxton Opera House, the Devonshire Dome and the list goes on.  The town has quite a past with being a spa town destination, even the Romans set up shop here.  I noticed the town planners have been really good at not letting modern buildings being built that are out of keeping with the town’s history.  The 70s shopping precinct is well hidden behind the existing shops so it doesn't detract from the aesthetic beauty of this town. Gold star to Derbyshire town planners!

My favourite place in Buxton is the Cavendish Shopping Centre.  If you are looking for something unusual, craft based or a nice present for someone, this is the place to go in Buxton.  I think it was a Spa in a former life and they have the original Victorian porcelain blue tiling on the walls.  I just think it’s simply lovely. 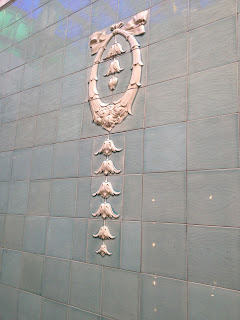 There were plenty of cafes doing good business with Sunday lunches, coffees and cakes.  We partook in some cake ourselves at Charlottes Chocolates at the Cavendish Shopping Arcade.  I had a chocolate muffin with decaf coffee and Neil had Banoffee pie with some traditional Fentimans botanical drink.  My muffin had extra choc chips that was ace and Neil’s pie was dreamy.

There is a precinct tucked away at the back of the main shops on the front.  A Waitrose supermarket could be found there which is an indicator this town has wealth – you will never find a Waitrose in scally place like Wythenshawe or Ordsall.  Anyway this precinct is really taking a hit in terms of high street recession, with probably 50% of the units remaining empty. Whilst there were the odd empty shop units on the main pedestrianized street, the precinct was taking the hit for the Buxton retail team.  Then again the precinct is one of those featureless 70s shopping hells without any natural light, so you can understand why retailers in Buxton would look at the street facing units first.  Personally I’d knock it down and start again.

The one fantastic reason to visit Buxton by car or motorcycle is to head south on the A54 and pick up the A537 to Macclesfield.  The A537 is otherwise known as the ‘Cat and Fiddle’ – one of the most dangerous roads in the UK, but one of the most exhilarating drives too.  I will one day do a separate post about this road.  It’s the type of road that demands a stiff gin and tonic when you have completed it safely.  It’s aces!!!
Buxton didn’t quite win me over again, but it's growing on me and definitely the weather made a difference this time.

So Buxton done we headed back on the A6 to Bakewell – our main destination for our short break – home of the Bakewell tart and pudding.
Posted by Anne-Marie Marshall at 11:02 pm No comments: