Bakewell was the base for our mini break. I’d been to Bakewell years ago on a random drive with my mates from Sheffield. On that trip I discovered I didn’t like Bakewell tarts, but I don’t hold that against the town as it's a very nice place.

We found a nice place online called Bagshaw Hall which had Sleep Lodges. Our room was in the Sleep Lodges and whilst the name ‘Sleep Lodges’ doesn’t sound promising the room was lovely. All the rooms in the Sleep Lodge had names and we were in the Ray Mears Room. The room had a fab view of the countryside and wasn’t overlooked. The rooms were tastefully decorated with a kitchenette area with table and chairs. I really like the kitchenette idea as you can make small meals instead of having to eat out all the time. I wish more places did this and it did make up for the fact they didn’t offer breakfasts. The bathroom was nice with a full size bath, with heated towel rail. All in all it was a nice, clean and comfortable room with the benefit of off road parking. The only thing which I wasn’t keen on was the fact the place didn’t have a proper reception area. We had to call a mobile number and then they appeared with the keys to the room.

The walk from the accommodation to the town centre was down a very steep hill, however the views were lovely. We did find a lovely ginger and white cat nearby which took residence on a vintage red Audi. 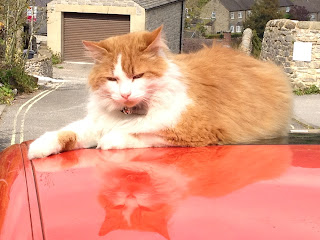 Bakewell is a rather dinky, twee and very lovely town where most buildings are built from the local stone. The town planners clearly want to conserve the heritage of the town and the new build flats were made to blend into the existing buildings. I really like this attitude as too often I’ve seen some planning disasters where inappropriate new builds can really spoil a place.

I really like the fact it has a river running through it and could have spent hours watching the birds and the fish. On the bridges you could see the trout in the water trying to keep still against the flow of the river. The ducks and the coots were rather entertaining as they were having battles with the ravens. The ducks were very used to humans and often you could find them wandering in the town – we found some nesting on top of a wall. 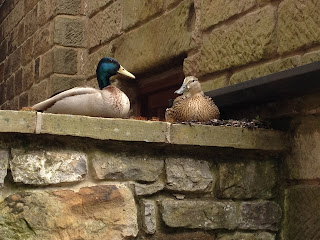 Monday is one of the best days to go to Bakewell as they have the Monday Market. We felt we were some of the youngest people there by at least 20 years – it was a pensioner’s paradise that day. Cafes were doing pensioner specials, charity shops were brimming with them and often they had a little dog in tow – normally an elderly terrier. There is also a farmers market too on the other side of the river next to the campsite.

The shops in Bakewell cater well for the tourist. There are plenty of cafes and pubs doing food. The jewellery shop did jewel encrusted dog collars and there was even a needlepoint shop with needlework pictures of Will and Kate. It’s worth exploring the side streets for some unexpected gem of a shop. The bookshop was very friendly and it’s worth having a look at what’s happening in the town hall. On the Sunday we found a record fair and Neil found some reasonably priced 60s singles in nice condition.

On the outskirts of the town there’s a small retail park with discount, craft and food shops. Again it was packed full of pensioners. I really liked the craft/food shop in the centre of the retail park and the ducks were sat outside soaking in the sunshine. I haven’t seen as many tame ducks since the ones in Holmfirth.

As we were there for two nights we had a chance to explore the town’s night life. Sunday night was dead and Monday was a little bit better. We ate at the Peacock pub on the first night as recommended by the Sleep Lodge owners and the food was good. The pub had a juke box so that kept Neil entertained for some time. On the Monday we went for fish and chips in the restaurant side of a chippy. We weren’t that impressed with the place as the chips were not good, although the lemon sole I had was nice. The Rutland Hotel had a public bar, but it was empty apart from us. The Red Lion had an annoying barman, so we only had a quick drink there. We also found that the Queens Arms and the Wheatsheaf did Desperados beer – last year we discovered its delights in Paris and it always reminds me of our trip. We stumbled on the Castle Inn on the Monday night and we were kicking ourselves as we should have found it sooner as it had a quiz machine. It kept us amused, although more amusing was a mad woman who came into the bar with her ghetto blaster playing 70s music. She seemed to be well known to the bar staff and seems to be a bit of a ‘character’ i.e. barking mad.

On the last day we had breakfast at the Original Bakewell Pudding Shop. Whilst I had a lovely bacon butty, Neil had a bakewell pudding. Bakewell pudding for breakfast? Well why not! However he did find it a bit too eggy for his tastes.


Bakewell is a great place to find yourself in, although if you are looking for a ‘banging’ night out I’m not sure this is the place for you – well on a Sunday and Monday nights. We were blessed with glorious weather despite the fact the days had been forecast for rain. It’s a great place to base yourself for a trip to the Peak District and I really enjoyed the mix of town and country in Bakewell. The only downside is getting to it from Manchester as the roads aren’t brilliant as those damn Pennine hills get in the way. It’s much easier to get to it from Sheffield. Bakewell is definitely a nice place to wind down on a long weekend.
Posted by Anne-Marie Marshall at 3:38 pm No comments: