We went to St Annes last year for a drive and to be truthful I've been itching to revisit the place. St Annes is a few miles south of Blackpool with its own mini pier and beach.  From Manchester we took the M61, M6, M55, A5230, B5261 and B5233 to St Annes.  It's quite easy to miss the signs and end up in Blackpool like the first time we went.

St Annes is a more upmarket resort than Blackpool, but then again that's not a difficult achievement.  The place is known as a retirement destination and from the number of charity and antique shops you can see why.  On the map you will notice it's called Lytham St Annes, but don't be fooled like me the first time I went - it's two towns close together and I think the map makers were being a bit lazy labelling the map.

Parking in St Annes is generally pay and display, although further out along the Promenade road there is some free parking.  I always forget this and end up parking at pay and display by the mini pier.

The pier is rather dinky unlike the three large piers at Blackpool.  There is an arcade with gaming machines, dodgems for young kids, a fortune teller and a couple of cafes.  Not exactly exciting, but it is nice to have a wander and look out to sea. There are no donkey rides to be had on the beach, as I think Blackpool has that market sown up.

The town centre has plenty of shops and the main street is broad with season themed street-art-cum-seating arrangements running the length of it. Although don't get stuck looking around the main street running through the town, as the side streets have lots to offer too.   There were plenty of people of all ages knocking about St Annes, although it's not as touristy as you would expect.  We did see a bunch of blokes dressed up in flat caps, tweeds and jodhpurs drinking outside a local pub - it was the Grand National that day.

The shops are interesting in this town.  I always like popping into the Sheep Shop to check out its chunky knit wool.  The Book Centre is a very well organised second hand bookshop on one of the side streets.  All the books are categorised and properly shelved so it's a joy to browse around without the fear of books collapsing on top of you.  I also like the automatic doors for the old ladies who frequent this store.  We did notice a terrible pun shop name - St Tanz.  Needless to say it was a tanning salon.

There are plenty of coffee shops in St Annes and you could get really fat on the delicious cakes they serve.  Although before you stuff your face in the cafes, you must try a cake shop called 'For Heaven's Cakes' where you can get fab cupcakes.  I had a coffee mocha which was a spin on the coffee and walnut cake with added choc icing.  Neil had a caramel based cupcake. Both were nice and give a great sugar high. 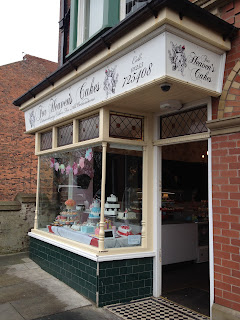 I mentioned St Annes is known as a retirement town, so there are plenty of valuable dead old ladies' knick-knacks to be found through house clearances.  As a result, there are plenty of antique shops.  I liked the indoor market which had a mad mix of hair extensions, cut priced bankrupt stock and antiques.  The antique section is quite nice to wander around and seems to do reasonably priced collectables and retro items.   The most notable thing I did find was a really startling taxidermy tableaux - I think it was two ferrets killing a rabbit or hare.  Honestly, who would buy that?  Here is the photo to prove it - 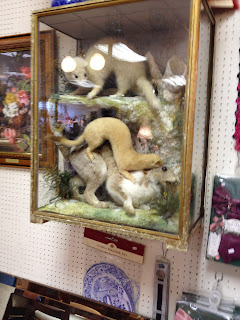 Whilst there are plenty of charity shops in St Annes, I think the antique dealer regularly trawl the shops for goodies and so there's nothing exciting to report.  I'm sure if you visited regularly you would pick up some good retro stuff though.

The town has its own department store called JR Taylors, although I did not succumb to the lure of the Clinique bonus this time.

We had fish and chips from the Seafarer which were fine.  The fish was freshly done and the chips I nicked off Neil were fine.  I'm not fussed with chippy chips normally as I prefer fries as they are much crispier.

There were lots of fine poochy dogs being walked in St Annes and I felt a bit naked without one.  I do have a random business idea of renting out dogs by the hour for such purposes.  A doggy dating service I could call 'Pretty Poochy'.  I did notice there was a small van covered in paw prints offering a dog walking service.  Combine the two ideas and you would be onto a winner - double bubble as they might say.

In the end the rain got the better of us and we headed back into the car. We drove down the Promenade to Lytham, making sure we didn't miss the signs like last time.


Posted by Anne-Marie Marshall at 3:11 pm