So heading north on the A639 for three miles we got to Castleford.  The sign said it was a 'historic roman settlement' - that sounded good.

Apparently the place is known for having an indoor ski slope.  Not that we stopped as Neil is not known for his sporting inclination.  The last time I went skiing I ended up in casualty with a suspected broken finger and concussion.

It wasn't looking great on the run into Castleford.  I was thinking I should write a letter of complaint to the Yorkshire Tourist Board at this point.  We parked up in a local pay and display car park.  It still wasn't looking any better.

We headed into the town centre and all I could hear were the strains of a trumpeter playing the most mournful version of 'Somewhere Over the Rainbow' I'd heard.  Given what I'd seen of the town so far, three click of my heels and I would happily be back in Manchester.  It's a tired town full of cheap shops that had seen better days.  Honestly Castleford is somewhere Shane Meadows could set one of his gritty dramas or a grim location for David Peace to set one of his Red Riding novels. 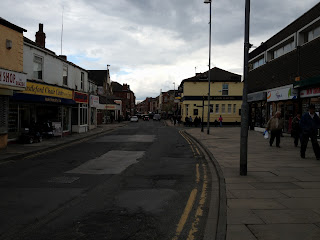 So the potted highlights were: 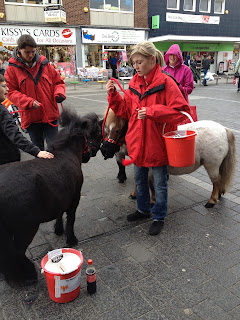 The indoor market wasn't very exciting, but if I recollect correctly the cafes in there were immaculate and busy with people having tea.

The charity shops were well used by the locals.  One lady was complaining about the Job Centre making her look for work whilst she's suffering from cancer - truly a sad state of affairs if you ask me.

The buildings indicated a prosperous years gone by with the mining, however the cheap shop fronts brings the tone down.  The Bondi Beach Bar is housed in what appeared to be an old cinema.  This town has seen better days and I'd be on the first bus out of town if I lived here.  I understand the Ski Centre is part of a bigger retail complex and no doubt this has sucked some of the energy out of the town centre.  This town centre is crying out for some investment. 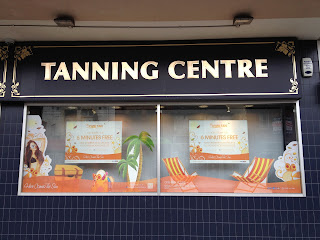 The only sign of hope was the Twisted Vintage shop on the edge of town. It looked pretty from the outside, however the inside of my soul was dying and we didn't stop to explore its delights as home was calling me.


Almost suicidal we left Castleford and headed back to Manchester and I got more cramp on the roadworks.

Posted by Anne-Marie Marshall at 1:15 pm