In my defence I did check on the Yorkshire tourist board website and it did say Pontefract was a place to visit, as it was a historic market town.  After the drive here I'm not too sure myself.

We took the M60 and the M62 and exited at Junction 32 to Pontefract.  At the moment (April 2012) there are evil roadworks on the M62 which go on for an eternity.  They have that awful average 50 mph speed limit with those yellow speed yellow cameras dotted along the motorway every couple of miles.  You risk getting cramp in your right leg trying to keep a constant speed.  The joy is immense when the roadworks end and you can hit the accelerator.

Before you get to Pontefract, the Ferrybridge Power Station looms large on the landscape as you drive along the M62.  Its eight cooling towers are an epic industrial sight.  As much as these things are not aesthetically pleasing, I'm always amazed at the scale and engineering of these structures.

We exited the motorway at junction 32 and we took the A639 to Pontefract.  On the right hand side of the A639 you see the immaculate Pontefract race course.  Apparently they are hosting a music festival in May with Razorlight headlining.  I think I will pass on that.

As we drove in to Pontefract the place didn't look exciting except for the black background and silver street signs, which I guess were to give the place a heritage feel despite the buildings indicating otherwise.  There were also signs saying Pontefract was a 'historic market town' and that it was the home of Haribo (Yay!).

We parked in a pay and display car park by Tesco's opposite the Haribo factory.  Through some alleyways filled with skater kids hanging out and practicing tricks we got into the town centre.  Honestly the shops were not exciting and quite a few were closed.  Although we did find a cake shop called 'Icing on the Cake'.  There was both an indoor and outdoor market, however neither of them were interesting.  They are just filled with your normal tat and cheap stuff. 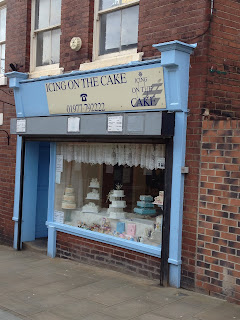 We checked out the charity shops as usual, however there was nothing of interest to be purchased. The charity shops reflected the place really - uninspiring, cheap and functional.

The one thing about Pontefract that was at odds with the day-to-day experience of the place were the buildings.  There were some really interesting architecture and if you look above the shop frontages you discover the history of the town.  There was a black and white tudor style building that was under restoration.  One of the pubs had some lovely tile work outside.  Some work had been done to restore the square near the KFC.  The place did have a museum too, however I'd lost the will to live to bother looking round.  It's such a shame as this place does possess the potential to be a lovely place. 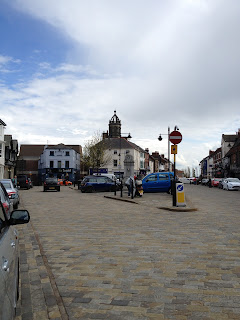 We did stop to have a bite to eat at the KFC and I overheard a woman talking to her friend complaining about being short changed in a bar the night before.  I had a inkling this town a had a very lively night life as we'd seen some scary looking bars and nightclubs:  Big Fellas and Kikos Night Clubs sprung out for us.  There was also a pub called the 'Malt Shovel' that reminded me of a pub name from Emmerdale, but the clientèle smoking outside the pub looked hard.   I told my Dad about visiting Pontefract and he had heard from his work mates this place was place had a scary nightlife and even the Wikipedia entry diplomatically says it has a 'down-to-earth' nightlife.  For me this is one place I'd be scared to go out at night as I reckon it could be too full on for a twee, indie kid like myself.

The most exciting thing we saw in Pontefract was some shetland ponies being pimped out by charity collectors to the locals for a fondle.  They were very cute, although one of the ponies was getting pissed off with a dog sniffing around.  So they gave a neigh and started scratching the ground with their hoof and the dog scooted off.

To be truthful I was losing the will to live here.  Maybe it was the rain, maybe it was because I'd been driving for over an hour or maybe it was because I was expecting something better than what we found.  Pontefract is a working class town that has seen better days.  If I had been one of those skater kids, we saw in the alleyway, I would have been on the first bus to Leeds that morning.  This is the type of town if you get the chance to go to uni you'd never come back.

Despite my plans to pick up some Haribo sweets, we headed out of  town minus sweets to Castleford - another place recommended by the Yorkshire website.

Posted by Anne-Marie Marshall at 1:33 pm