So from Hale we headed over to the village of Lymm.  I'd never been to Lymm before although I have occasionally passed through the outskirts, but never made it to the village centre.  It's quite easy to miss as the roads tend to bypass the centre and you have to be quick to pick up the signs.

Parking is a bit of a nightmare in this village as the car park isn't that big.  We had to park round the back in a nice little housing estate, which is a stone's throw from the centre.

I really didn't know what to expect from Lymm apart from a couple of charity shops, but I really liked what I saw.

Lymm town centre is built on a hill, with a lovely weir at the bottom with gallons of water crashing down from Lymm dam.  Oddly at the top of the hill is the Bridgewater Canal with lots of ducks and barges passing by. Lymm must be a popular destination for canal dwellers and tourists as not only it's very pretty, but also full of cafes, restaurants and pubs. 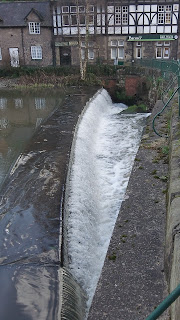 I was pleased to see there were still plenty of pubs still open in Lymm.  The one which stood out for me was the Spread Eagle as it looked like it was plucked out of  Bavaria and plonked into Lymm.  It really had a European look with a big golden eagle looking down menacingly onto the street. 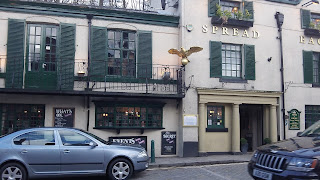 There are some nice coffee shops to wile away an hour or two.  One of them had a takeaway and deli attached, which was rather busy when we looked in.

There are two charity shops in Lymm - the International Aid Shop, which closes at 1pm on a Saturday  and the St Rocco Charity Shop.  As we had lunch in Hale we missed out on the International Aid Shop, which was a shame.  Thankfully the St Rocco was still open and it was like a community centre for the old ladies chatting on the comfy chairs. I reckon they had a great view of the street as the shop was high up and could have a good gossip about the people passing by.

We found an old style sweet shop where Neil got some fruit polos to break his teeth on and I got Butlers dark choc mint bar.  These type of retro sweet shops are popping up everywhere at the moment, which makes a change from the rash of pound shops that clog up the high streets.  When I see them, I do get flashbacks to the 70s where my the local corner shop in Cheetham Hill used to sell quarters of pear drops from large sweet jars.

According to Wikipedia there is a celebrity contingent resident in Lymm including Ian Brown of the Stone Roses, Tim Booth from James and Matthew Corbett from the Sooty Show.  I can quite understand why people would want to live in this lovely, leafy village and given the opportunity I would too.

Lymm is well worth a visit, as I was pleasantly surprised by this little oasis of loveliness.

Posted by Anne-Marie Marshall at 12:31 pm