It has been a while since I've posted as life has a habit of catching up on one.  Anyway essay is done, cold recovered from and it's time to pull one's finger out to write some blog.

So a few weeks ago another Saturday came along and I dusted off the map.  We've done Cheshire quite a bit lately and we'd planned to go Lancashire way. However the weather wasn't promising so we didn't want to go too far a field.

Hale and Hale Barns are always a good bet, especially when you decide to do lunch there.  The one thing I find about going from Hale Barns to Hale is that I always get confused where it is and what side of the road to look for to take the turn to Hale as it is poorly signposted..

Our first stop was Hale Barns as they have a nice little Oxfam there.  The ladies in the shop were training a new volunteer as we had a browse.  We didn't find much, but the stuff there is always quite interesting.  Opposite Oxfam is a 60s style small precinct with a small supermarket and a handful of shops.  It really isn't exciting.  Bev Callard (Liz MacDonald from Corrie) used to own a posh pub here, but apparently it had money troubles.  The pub has now been converted into a solicitors instead.  I noticed the little Natwest has gone from here too .  Despite this, Hale Barns does have really big houses along the main road, some of which are stunning.

I also noticed that Balfour Beatty were constructing a large building on the run out of Hale Barns towards Hale.  I think it's a new school.  It looks really amazing with the slate black bricks bouncing the light so it glitters in the sunlight.

For me Hale Barns is a bit special as it has a Smiths link as Morrissey used to live here.  A long time ago I used to work with a woman who was a friend of Morrissey and was in fact the star of the "Everyday is like a Sunday" video.  She never mentioned it to anyone until a girl who went to school with her started work at the theatre and spilled the beans on her.  She came from Hale Barns and was a neighbour of Morrissey.  I thought that was fab at the time. Now things have moved on - my Dad knows Johnny Marr's dad, which I think is bloody amazing.  I'm nearly 40 and The Smiths are still fantastic after 25 years of adoration from me

We've been to Hale quite a few times as we have eaten there with my best mate.  We've eaten at the Man Zen (posh Chinese - very nice), Dee Thai (Thai - you must order the mixed starter platter - to die for!) and the American Bar and Grill.  You really can't go wrong eating out here.  There are other places to eat here like The Hale Grill, Simon Rimmer's 'Earle', Piccolinos, La Vina, which I believe to be fine places.  For me though, Dee Thai is the best.

It is a real education eating out in out of city places, as you don't get that awful tension of having to be alert in cities.  My brother mentioned that I have a Manchester mode, where I get hyper alert in uncertain situations - I guess when you have been mugged and hustled in the past you can can get quite defensive.  In Hale I never have that problem as there is a nice sleepy-out-of-town-vibe where I really relax.

The American Bar and Grill has lovely food, but on a Saturday afternoon it is like a posh McDonalds as there were packs of kids screaming the place down.  Bless the staff though as they do supply crayons and play sheets to calm the kids down.  I had a Tennessee burger with Cajun fries and Neil had surf n' turf with curly fries.  I really liked mine as it had a Jack Daniels coating which was sticky, sweet and very tasty.  Neil's curly fries were really nice and tasty too.

Apart from its many restaurants Hale has lots of pretty little shops selling kids clothes, posh gifts, retro sweets and an old style post office.  Just off the main road is an immaculate bowling green, which really adds that English village feel to Hale. 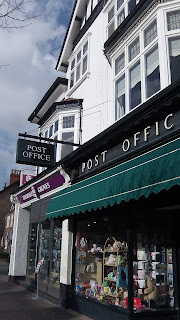 There has been an invasion of the mini supermarkets to Hale - Sainburys, Tesco and the Cooperative have small stores in the town centre.  There is also a Costa Coffee along with the other little coffee shops, including the Art Cafe which is always full of families.

The centre of Hale has a station and a level crossing dominating the town which can back the traffic up from time to time.  There are a couple of cheap car parks either side of the station to park in as it can be problematic parking on the streets nearby as it is a residential area.  Next to the level crossing is a lovely pub called the Cheshire Midland which does weirdy-beardy-ales.  They have really nice and comfortable side rooms where you can get lost in conversation for hours with a pint or two of their finest ale. 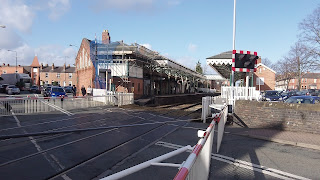 I like Hale as it's very lovely, clean and relaxed.  Clearly there is civic pride in this village and you can understand why it's very expensive to buy property here as it's so nice.  We'll be back again to work our way through the yummy restaurants!

Posted by Anne-Marie Marshall at 1:46 pm