Richmond - the North Yorkshire one

Before planning our trip to the Yorkshire Dales I'd never heard of the town of Richmond.  Obviously I knew of the Richmond down south, but not the Yorkshire one.  So I thought I'd better have a quick look on wikipedia.  Market town - check!  Georgian history - interesting!  Fab reviews - Bingo!

So after a two hour journey from Manchester we made it to Richmond.  The journey was a bitch as we hit two sets of road works on the M62 and the A1.  Both sets of road works were doing that awful 50 mph average speed limit camera thingy.  My poor right foot developed cramp trying to keep a steady 50 mph.  It got so painful that later in the day I had to rub Nurofen gel into my foot to ease the pain. 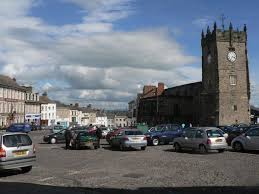 Anyway, Richmond appeared to be built into a side of a cliff, with lots of cobbles and a mad one way system.  Getting parked was a nightmare and after 15 minutes of trying to find a parking space we nearly left.  Thankfully we spotted a local Cooperative supermarket at a mini roundabout on the edge of the town centre.  We managed to get parked and had 3 hours free parking too.

Wandering around Richmond it was a nice, solid, unpretentious Yorkshire town. The skyline was dominated by Richmond Castle, an English Heritage site.  The streets were cobbled and the town square housed a nice market selling local produce.

There were a few charity shops for us to explore, but there was nothing exciting to report.  We also popped into the secondhand book shop and a rambling antiques shop.  Neil complained the shops were rather small, but that was down to the town's Georgian architectural heritage.

We had some fish from Barker's Fish and Chip shop.  There was a queue in the shop, but it was worth the wait as the fish was nice with lovely crispy batter.  There were quite a few locals in there which is always a good sign.  We followed this with a 99 ice cream from the market and were served by a girl who clearly didn't want to be there.

The local accent was a bit of a mix between Yorkshire and the singsong North East accent.  I suppose since Richmond is so far north in Yorkshire there will be cross border activity with the folks from County Durham.

The town itself is not too touristy and it was not overrun by high street chains.  I did notice that it seemed to attract a lot of bikers and it later became apparent why they were there.

So after a quick trip to the Cooperative supermarket (to justify using their car park), we headed off on the B6160 to Grassington.
Posted by Anne-Marie Marshall at 10:10 pm