Neil was going to the annual Kaleidoscope meet up in Stourbridge and I didn't want a repeat of last year.  He managed to get on the wrong train home and ended up going south instead of north.  Only by the miracle of Blackberry, when I was at my friend’s fortieth birthday party, I got him on the right train home.  This time I was driving, so if we got lost, we’d be lost together.

Before the journey had started I was having problems with Google maps and iPhone maps as they were giving me some torturous route through Wolverhampton centre.  “Sod that” I thought as it was a sure fire way of getting lost.  I wanted lots of motorway with minimal A routes.  Indeed I found a route that was five miles longer, but five minutes shorter with little chance of getting lost – perfect!

We parked in the Ryemarket multi storey car park.  It was one of those grim 70s concrete hells with the most awkward supporting pillars that makes it difficult to open car doors.  A lovely old lady gave us her pay and display ticket for us to use - what a great start to our trip! 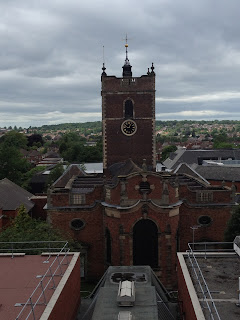 We found the Talbot Hotel in the heart of Stourbridge and I bade farewell to Neil.  I wasn't fussed about spending seven hours watching old telly clips and rare Top of the Pops shows as I had plans – there were two towns to visit.  The first being Stourbridge and the other being Kidderminster.  Not exactly Northern towns, but I can encroach into the Midlands from time to time.

Stourbridge town centre is surrounded by a ring road; you could say it’s a modern day moat cutting the town centre off from the rest of the town.  Later that day I was seriously cheesed off by that ring road as it was difficult to find the right turn off for the car park when I returned from Kidderminster.  It can really do your head in trying to remember which lane to keep in for the turn off.

Back to Stourbridge – admittedly it wasn't the most exciting town in the world.  There was a 70s precinct hell in the shape of the Ryemarket.  It had a mouse mascot called Ryely, which in truth looked a bit scary.  The public toilets were clean and well maintained, although they had the weakest hand dryers known to man.  There was a Waitrose which is my barometer of affluence, but I didn't see much signs of it in the town.
The high street had the most proliferation of shops.  There were lots of charity shops and I popped into a couple.  I noticed wool seemed to be a popular donation in this town.  Although without Neil to check out the records I can’t say whether the shops were good, bad or indifferent on the musical front. 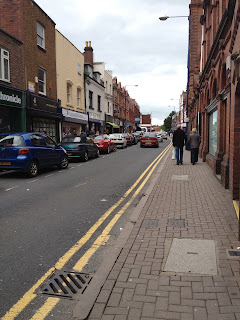 I did try to find somewhere to eat, but there wasn't an amazing selection.  I did eventually have a coffee in Costa on my return from Kidderminster and I managed to confuse the staff with my drinks order – soya, decaf, cinnamon latte.  Poncey I know, but that’s how I like it.  I did notice a bookshop not only doubled as a coffee shop, but also offered a counselling centre and pregnancy support service.  I know bookshops are struggling and need to diversify, but this goes to another level of multi-tasking.  Admittedly I do think it’s a brilliant idea and if this manages to keep the bookshop open good on them.

It’s a down to earth town that’s a bit chavvy in parts.  I did notice one strange, old lady with white hair styled with tight curled hair to the front with long, straight hair at the back.  It was quite a bizarre look and she looked fierce.  It was as if she found a style she liked in the 60s and is resolutely sticking with it.

The buildings were a mish-mash of styles, era and sizes, all of which were tightly packed together to make up the streets.  There was a little arcade which ran between a couple of streets with a charity shop, café and spiritual centre, which was nice.  Although there was the saddest looking market called Smithfield Market tucked away on a side street.  Only a handful of purpose built stalls were open selling handmade jewellery, cards and reading glasses.  How they could make ends meet I’ll never know.

Stourbridge is really missing a proper shopping experience as you would be hard pressed to do all your Christmas shopping here.  Although I did notice on my many circles of the ring road there was a rather large building site and I'm hoping this is a new shopping centre as Stourbridge does need some retail revitalisation.

Finally 7pm came and I retrieved Neil from the Talbot hotel.  He had a great day watching old Top of the Pops episodes and chatting to his friends, whilst annoying the other people at the event with their animated banter.  I too had an interesting time doing solo town visits; however I did miss having Neil on my travels as you need to share this sort of thing with another person.  Next year I think Neil will be risking the railway to get to Stourbridge and now at least he has his own Blackberry to find his way home.
Posted by Anne-Marie Marshall at 2:08 pm