I took the A451 from Stourbridge to Kidderminister, which was a lovely leafy road through the countryside.  I managed to hit three counties on that road: Staffordshire, Worcestershire and the West Midlands.  It’s a beautiful run with a few pubs en route offering lunches.  The roadside borders were alive with elderflowers and poppies punctuating the hedgerows.  It was a perfect example of the English countryside.


Somehow I managed to take the wrong turning and ended up in Wolverley.  So a quick spin round on a roundabout and I was back on the right route.
I don’t know what I was expecting from Kidderminster, but it wasn’t this.  The name Kidderminster sounds quite affluent and leafy, but in reality it wasn’t a well-to-do place.  On the route into the town centre there was a really scruffy row of shops with dodgy looking shops.  One shop was called Amsterdamned – I can only assume it was a hydroponics shop.

I parked at the Swan Shopping centre.  Again, like Stourbridge, it was one of those awful 70s built concrete precincts and as ever was fairly uninspiring.  The main shopping streets were pedestrianised and there was an outdoor market selling cheap tat.  I did notice there were hi-vis tabards available for kids with phrases like ‘Daddy’s Little Helper’ in both yellow and vivid pink.

There was a poster promoting a John Denver tribute act due to play in the town.  I’m curious to find out why would anyone want to be a John Denver tribute act and also why would then would they play Kidderminister of all places?  Then again the legendary Robert Plant comes from Kidderminister, so it's probably not that odd.  The musical life of a town can be rather bizarre at times. 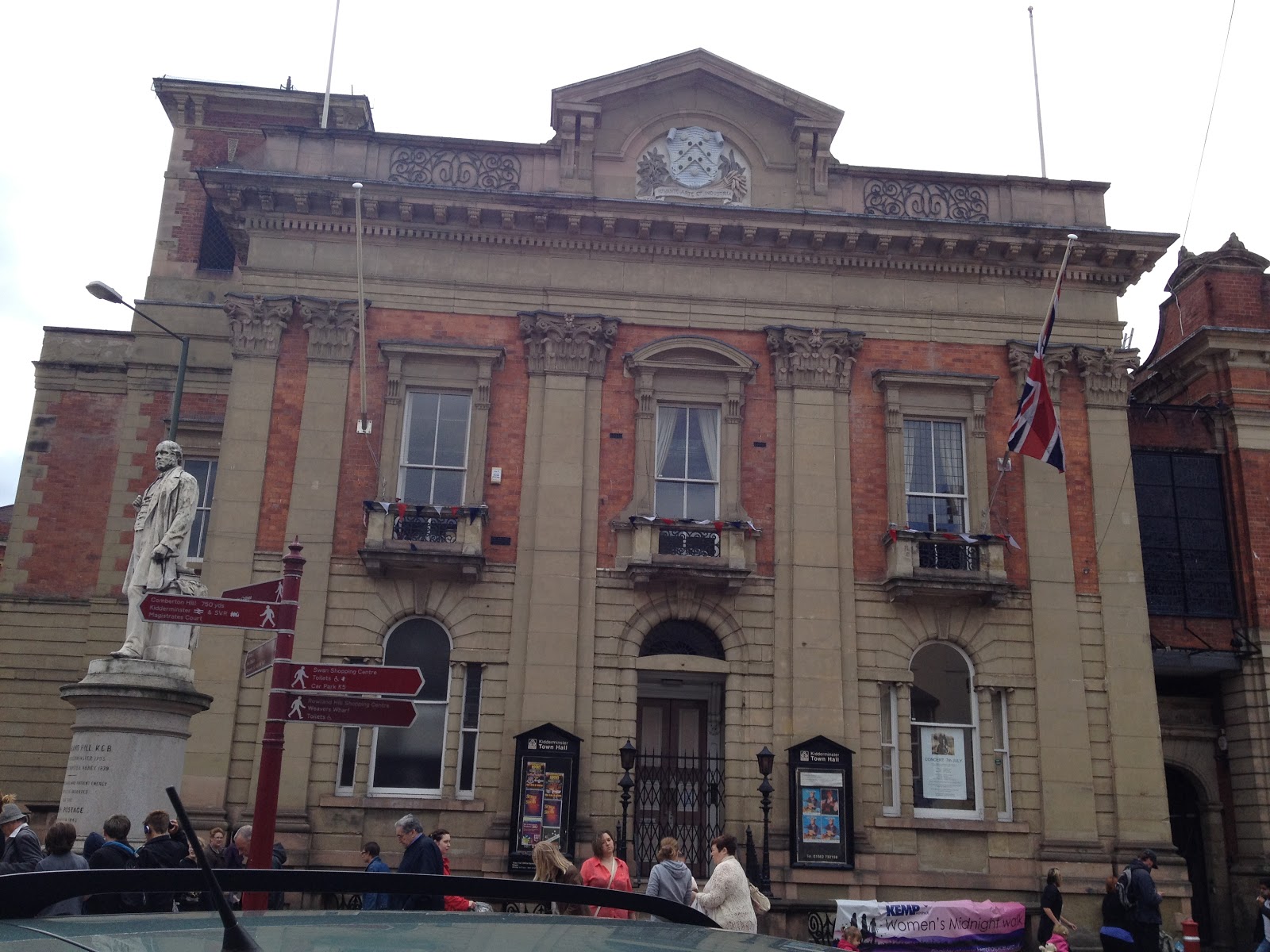 Looking up you could see how the old original buildings were incorporated into the new featureless buildings.  I assume that was something the town planners insisted upon when the precinct was being built.  That said the town hall did look nice and historic.
There was a big retail park to the rear of the main pedestrianised shopping area – M&S, Next, DW Sports shop and fitness and Debenhams.  I found myself in Debenhams browsing the racks and bought myself a top to go with my brown boots.  It was quite odd not having Neil with me.  I’m so used to him looking bored and posting on Facebook whilst I’m shopping.  In Holland and Barratt I saw a distressing sight of a fat bloke in a vest – it was not a good look unless you are David Beckham.

I grabbed a bite to eat in Frankie and Benny’s as I was starving and needed something to cheer myself up as it was turning into a depressing visit.  Although I think the staff weren’t used to people eating alone.  That’s something I find annoying in restaurants as they are not geared up for solo diners - it’s as if I had leprosy or something.


Charity shops were plentiful in this town.  One old lady in a charity shop had clearly made the effort in her appearance to go out shopping, which was nice to see.  I’m still kicking myself as I did not buy a pair of bright yellow, glass vases I spotted in one charity shop.  If they had been cheaper I would have definitely bought them. 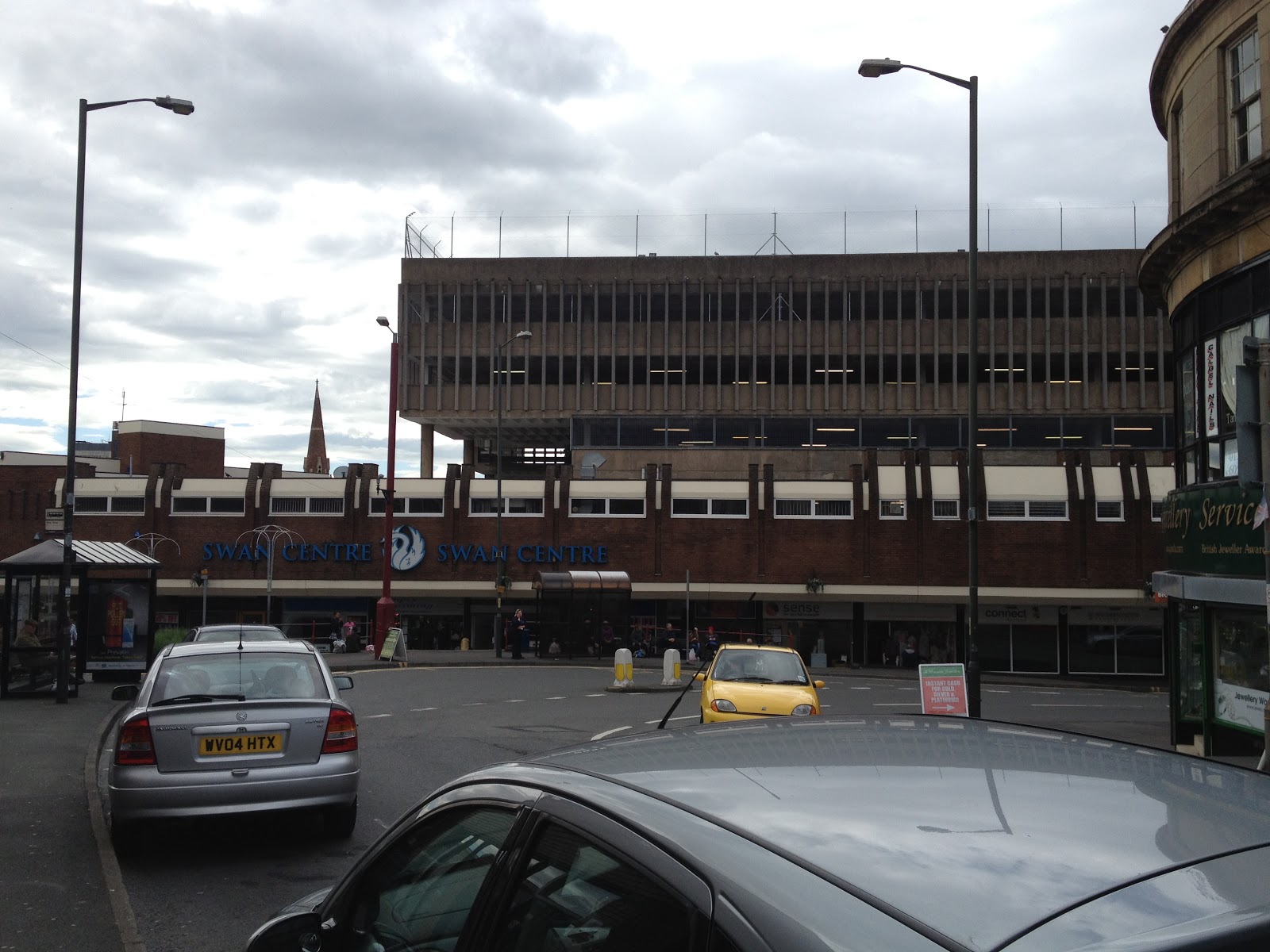 Time was running out on my car park ticket and I was quite glad to go.  Kidderminster was a non-descript town and any heritage the town had was subsumed into a red brick precinct hell.  The place was definitely more chavvy than Stourbridge.  I can hazard a guess local people tend to head to nearby Birmingham on a Saturday afternoon rather than spend time shopping here.
Posted by Anne-Marie Marshall at 1:16 pm