Where do I start with Winsford? First of all I'd never heard anything of interest about Winsford before this trip, except I'd seen it on the map years ago when I had to come up with a town name for a school essay. Secondly the Wikipedia entry did not really prepare me for the 'delights' of this place. Now having been to the place I can read between the lines of the Wikipedia entry: "local Salt Mines" means it's a working class area; "New Town" means it has appalling, concrete-based architecture from the 60s and 70s; and "population migration from Manchester and Liverpool" means there is a Chav element to the population. I am from Manchester and I have worked in overspill council estates like this place so I can legitimately point this out.

However I digress slightly - after negotiating the numerous roundabouts to Winsford we ended up in the town centre, which consisted of a 70s style shopping centre with a multi-storey car park to accommodate ASDA's clientele. We did try to park in the car park, but as it was very busy and I'm nervous parking in packed car parks (long story), we ended up parking on a side street outside the local Bingo Hall.

There were quite a few charity shops in the shopping centre and they were packed with customers. One strange thing I noticed was that one of the charity shops was actually giving videos away free . Surely charity shops are there to make money from their donations, even if they ended up selling stuff at 20p? There were also quite a few empty shops too, which was quite sad really but I guess that reflects the times we live in. Then again most small shops would struggle there as it is hard to compete against ASDA. 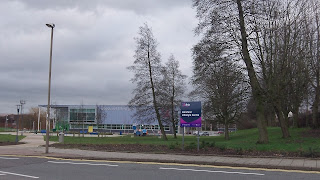 After losing the will to live we went outside and we actually did find a little ray of hope in the shape of the Winsford Lifestyle Centre. It looked bright, lovely and modern from the outside. Apparently it has a swimming pool, fitness facilities and a theatre. I really hope this place is well used by the locals as it is a beacon of hope in an essentially depressing place.

We did see a rather bizarre sight by the local pond - a one legged bird with a red bill, black body and white tail feathers hopping about. However that sight didn't excite us enough to stay in Winsford longer than was necessary. So we returned to the car and drove off on our next leg of our Cheshire road trip to Northwich.

The next day I mentioned to my Dad we'd been to Winsford and he asked why on earth did we go there. Apparently over the years he has had to work in Winsford replacing gas mains and he wasn't exactly impressed with the place. To him it wasn't the sort of place you visit and according to his colleagues it was a crime hotspot too. Although on the plus side, he did mention there was a rather good pie shop, which often had huge queues outside at lunch times. He also mentioned that the local high school was a source of drama that would rival Waterloo Road. The teachers would often have to round up kids from the streets at lunch time to get them back in for the afternoon classes. One kid who was late back from lunch told the teacher they had been stuck in the queue at the pie shop. When the kids left school in the afternoon, my Dad noticed that the kids were either snogging each other, crying as they had broken up with someone or were having altercations. I dare not think what the teenage pregnancy rate is here, but I think Jeremy Kyle might get a show or two out of it.

Honestly Winsford is not day trip material and from our trip there are some deprivation issues. It is clear that the Council is trying to address these issues with relocation of the Council and Fire Services to the town centre and the building of the Winsford Lifestyle Centre, but there is still some way to go.