Finally - a day where the weather was reasonable and both of us had a day off. Woo! I've been itching for ages to do a proper run out in my car to visit a few northern towns and villages. So I thought Cheshire would be good as it's a straightforward drive and there was no risk of freaky weather.

We've been to Cheshire loads of times but there were still some places we haven't been and Holmes Chapel was one such place. I checked online and it did have a charity shop and it was also close to the other places we were going to visit, so it was the first on the list. 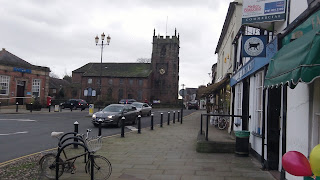 M60, M62, M6, off at junction 18, turn left onto the A54 and we were in Holmes Chapel. It's quite a nice place - leafy, countryside, big houses. It's clearly a commuter belt village for Manchester, Liverpool and Chester. I thought it was going to be quite a small place and whilst the centre is there were plenty of houses and estates surrounding the village.

The village itself is based round a small junction with the Church dominating the centre. We parked in the free car park next to the library and the small shopping precinct. There was a little supermarket, Bargain Booze, a take away Pizza place, London Road Fish Bar, hairdressers, pharmacy and Sue Ryder Charity shop.

The Charity shop itself was bright and well organised, but nothing exciting caught our eyes. We did pop into London Road Fish Bar to grab a bite to eat as it looked nice, clean and full of locals. I had a mini fish (I don't like chippy chips as they are not crispy enough for me) and Neil had a battered sausage. Mine was nice although it did have an odd after taste.


A hop, skip and a jump we were in the centre of Holmes Chapel. There isn't a huge amount to see - a Church, a Bakers, a Cheese Shop, a couple of hairdressers, some banks, pubs, an Indian restaurant called Pink Garlic, a few other shops and at least three estate agents. That's it really - a nice, well-to-do place, but nothing much to do.

It's worth a quick visit to Holmes Chapel to have a nosey as it's a nice place and for stalking purposes if you are a fan of One Direction apparently Harry Styles comes from here too.


Posted by Anne-Marie Marshall at 9:18 pm