After Holmes Chapel we headed off to Middlewich which is only three or so miles down the A54 on the other side of the M6.

On first impression driving into Middlewich it is not as affluent as Holmes Chapel. Again the Church dominated the centre of the town and it appeared a little bit bigger than Holmes Chapel, but not much. We parked on the main shopping street as it has one hour free parking and given the size of the town I doubted whether we’d be there an hour. 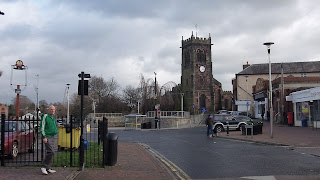 I had done my research and there were three charity shops on this road - Age UK, Cancer Research and St Luke's Hospice. Whilst I didn't find much in the charity shops Neil found a Kylie Greatest Hits album from 1992 - apparently vinyl albums from 1992 are much rarer to find due to the surge of CD sales from that year onwards and therefore more collectable, even Kylie’s ‘Greatest Hits’. He also picked up a Wonder Stuff album and both will be soon found on Vinylnet.

Anyway the street was a mish-mash of shops with a traditional butcher, pub, barbers, cafes, gift shops, opticians and a pet-supplies-shop-cum-wool-shop. Around the corner was a ubiquitous Tesco Express, like an invading Viking sucking the business out of the local shops and dominating the shopping life of this town. I’m not a fan of this type of invasion of the supermarket to the high street as it really rips the heart out of local businesses and can dilute the distinctiveness of a town.

I had to go into the pet-supplies-shop-cum-wool-shop as I'm always after some interesting chunky knit wool. I didn't stop long as it did have the most peculiar smell and Neil fled the shop immediately - it must have been something to do with the smell from the pet supplies side of the shop. Sadly their definition of chunky knit wool is not mine – mine is a minimum of size 10mm needles like Sirdar's Indie and Squiggle.

The buildings in the street were quite interesting and were an architectural history of the evolution of the town. Wheelock Street had a diverse array of buildings of different shapes and sizes – red brick two-up-two down, new build shops and flats to blend into the existing red brick buildings and black and white Tudor style buildings peppered the street. The Alhambra building had quite an interesting frontage like the old style cinemas from the 40s and 50s. I couldn’t work out whether it was just a frontage added to an older building or built from scratch. What was clear was I wouldn’t be seen dead in there as it appeared to be a dodgy bar above what appeared to be a restaurant. A bit of decorative TLC would not go amiss with this building. I did have a quick look on Google Street View and my goodness this building has gone downhill since then. 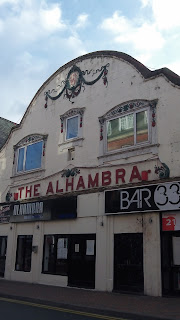 This street did really need a makeover though as it could be really pretty with a lick of paint and some hanging baskets. I guess the recession has hit most places hard, although you couldn’t really tell in Holmes Chapel, but here you could with some empty shop fronts. There was a derelict building practically falling down with no sign of repairs to be made. That said some shops had made the effort, but this little town has the potential to be really lovely with some care and attention. A festival or two and a town in bloom competition could really boost this place.

So with purchases made, we left on our travels around Cheshire.  We headed west on the A54 and motored our way to Winsford.

Posted by Anne-Marie Marshall at 11:25 pm