Wow! Such a blast from the past - from 1990 to 1992 I spent two fantastic years here. It was a roller coaster ride and I had a memorable time here: City Road, Tavistock Road, the Leadmill, Cario Jaks, Nelson Mandela Building, the Yorkshire Grey, The Crucible bar, The Porter Cottage, the Nursery Tavern, the Frog and Parrot, The Damned, stupidly missing out on seeing Pulp and Blur, The Stag, the Howard Hotel, Sheffield City Poly Drama Society, Abbeydale Road, Sheffield Library and fines, Ecclesall Road, The Moor, Endcliffe Park, Boddington the Hamster and the list goes on. 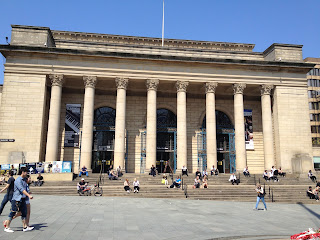 I studied at the Poly doing a Public Administration degree, but got sidetracked by the Drama Society and eventually dropped out of Poly.  No regrets, apart from not transferring to the History of Art, Design and Film course. Twice I ended up in casualty: nearly breaking an ankle in a nightclub and as a result ended up on a drugs trial - pharmaceutical not judicial; and then chinning it down a dry ski slope almost breaking a finger and giving myself concussion. The people were fantastic too: Rachel, Mark, Jack, Pip, Charlie, Andy, Sati, Jon, Rachel, Matt, Alison, Jack, Mark... and my constant touchstone and bestest mate Shaun.

I've been back a few times since for business, a wedding and the occasional nostalgia trip, but the lure of Sheffield is strong and emotional. I could do a bio entry but... to be awkward I'll leave it at that apart from my last day living in Sheffield. I went to have a wander around Endcliffe Park and heard two singer / guitarists sing 'Here comes the Sun'. This has become my theme song for Sheffield and every time I hear it I'm back here in my mind. The stories I could tell, but however tantalising the teasers are I won't - the best of times and not the best of times too, but a fantastic experience all the same.

So in 2012, 20 years later, I find myself back in Sheffield. Sheffield has absolutely transformed over those 20 years and I’m thrilled to say, on the whole, for the better.

Our first port of call was Nether Edge.  As we were coming from Bakewell, we drove through Totley and down Abbeydale Road. I had forgotten how green and lovely the road was, that was until we hit Nether Edge. I swear from my memory Nether Edge was never that scruffy, but time can put a rose tinted view on the past. Obviously I had to do a detour to check out the house I used to live in. Nothing much had changed apart from some double glazing, a sky dish and some wheelie bins. It was probably still a student house and I have fond memories of my attic bedroom.  Although I did accidentally set fire to it, but it’s amazing what a sample pot of paint can hide.

Next on the road trip was Hunters Bar and I had the bright idea of cutting across town using the side roads. Mistake! Since the early 1990s road humps have spread across the country like a lumpy rash and Sheffield hadn't escaped.  So my poor car had to navigate the endless humps littering the tree-lined streets. It didn't help either that over 20 years had passed and my knowledge of the Sheffield back street had completely escaped my brain. Eventually I finally found the turning onto Sharrow Vale Road and parked outside Porter Book Shop.

Sharrow Vale Road reminds me of Chorlton with its quirky shops, fancy eateries and well-meaning fair trade shops. I was really delighted to see the Porter Book Shop.  Back in the day it had been my favourite shop on the road and I'd often spent plenty of time browsing the plays and classics. So obviously I had a quick browse and nothing much had changed – it was still flogging classics and second-hand text books to students.

Further down the street I recognised the post office, the local chippy and the Porter Cottage pub. It was such a bright and sunny day it brought back such fond memories especially of nearby Endcliffe Park. By the junction I found a wool shop - woo!  So Neil adopted his usual position - waiting outside of the shop posting stuff on Facebook, whilst I tried to find the elusive Sirdar Indie wool. Sadly they didn't stock it, but the staff were far nicer in telling me.

As I recollected from previous visits Eccleshall Road was a good hunting ground for charity shops - so Neil was pleased. As we weaved down the road we spotted some other people doing the charity shop rounds. Thankfully they weren't looking for records, otherwise that can cause a log jam whilst browsing the records. There was one charity shop called the Big Green Bag that stuck in my mind.  It was really well laid out in a vintage shop style.  I have found that some charity shops have now adopted this look and I think this helps them to sell the stock more effectively as it doesn't look like a jumble sale.

The vibe of Eccleshall Road really reminded me of Fallowfield, with every other shop a bar or a restaurant with student offers. As you would expect over 20 years much had changed in terms of shops, however the student population remains despite their transient nature.  Students bring an energy which makes Hunters Bar a bright and vibrant place in the term time.

Sadly as time was pressing, we didn’t make it to one of my favourite places Endcliffe.  Such a shame, but damn the parking meters on Sharrow Vale Road.

Final stop of the day was Sheffield town centre.  We parked on the edge of town and walked into town through Atkinson's department store onto Sheffield Moor shopping area.  I used to work at the Boots the Chemist along here and sure enough it was still there.  Though though shops had come and gone the 60s precinct remains looking worn and tired.  However further up the road things had seriously changed.

Sheffield has undergone a massive transformation over the years.  The railway station has been renovated and now opens up onto a modern steel and water sculpture.  Up the hill, opposite the Library, the wonderful Winter Gardens has been built and now houses an art gallery and cafe.  The Crucible and the square outside has been revitalised.  The Peace Gardens by the Town Hall has been opened out and remodelled.  As it was a sunny day, the Yorkshire folk were taking full advantage by sitting in the gardens eating their lunch.  By Sheffield City Hall John Lewis had opened and I made one last ditch attempt at wool shopping in their haberdashery section.  Joy of joys, they stocked Sirdar Indie wool and had the shade I wanted, which miraculously was from the same batch.  It has to be said, simple things like wool give me pleasure. 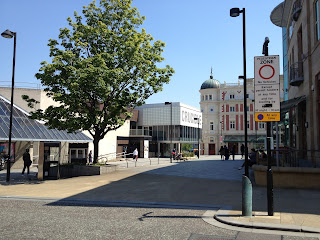 We then wandered down Division Street.  This is one of my favourite streets in Sheffield as it’s a sort of indie street, with independent stores and boutiques, bars and pubs, second-hand shops, cafes and the odd charity shop.  Neil managed to find a vinyl My Bloody Valentine LP, which was an excellent find.  I guess you could say this street is a bit like the Northern Quarter in Manchester, thankfully without the drugged up scallies.  At the end of the street was Devonshire Green, a newly built park, which was full of students and workers sunbathing.

Our time in Sheffield was up - damn those parking meters.  We didn’t get chance to explore the city thoroughly, but what we did see was lovely.  The town planners had done a good job transforming the city over the past 20 year.  Normally I usually ask ‘what were they thinking of?’  However the Sheffield I remember 20 years ago had been haunted by some seriously bad 60s architecture.  Time and tons of regeneration money has been well spent.

If I was a student today I would be so excited about studying in Sheffield now.  Sheffield Poly is now Sheffiled Hallam Universtiy and it has worked hard to shift the shadow of being a former Poly.  It's now a well-regarded University and I think it's wonderful they have an Andrew Motion poem on the side of a building you can see when you leave the railway station.  The old Nelson Mandala student union is now located in what used to be the Museum of Popular Music.  This is on the doorstep of an independent cinema and arts centre.  The great thing about Sheffield is the fact it has a village feel and has extensive greenery you don’t find in the likes of Manchester.  The one thing about Sheffield I don’t miss are the hills - some are like cliff faces and are completely evil to walk up!
Posted by Anne-Marie Marshall at 11:45 pm